Founded in 1858 by Frederic Boucheron in France, The House of Boucheron is a world renewed jeweler. Frederic founded the dynasty with the opening of his first store during the heyday of the Second French Empire in the Galerie de Valois at Palais-Royal. Creating his atelier in 1866, he would win the Gold Medal during the Exposition Universelle a year later in 1867. In 1878, the Russian Prince Felix Youssoupoff purchased a corsage decorated with 6 detachable diamond bows during one of his many visits to Paris.

Boucheron moved his shop to 26 Place Vendome in 1893, becoming the first jeweler to locate on the legendary street, where Boucheron remains to this day. Legend has it that Frederic chose this location because it was the sunniest corner on the square and he felt the diamonds in the shop windows would sparkle all the more brilliantly. 1893 also saw the opening Boucheron in Moscow, moving to Saint Petersburg in 1911. Boucheron opened a store in London and an office in New York in 1903.

Boucheron was commissioned to make a tiara for Lady Greville in 1921. The tiara was later given to The Queen Mother, Queen Elizabeth. Her grandson Prince Charles would later pass on the tiara to his second wife Camilla, the Duchess of Cornwall. The Maharaja of Patiala had Boucheron set the stones of his treasure into a magnificent collection of jewelry in 1928. Notable patron’s of Boucheron over the history of the company would include; Tzar Alexander III, Maharajah Sir Bhupinder Singh of Patiala, Riza Shah Phlevi, Queen Farida of Egypt, Queen Rania of Jordon.

The business remained in the family after Frederic’s death in 1902 until 1994 when the family sold the company to Schweizerhall. The House of Boucheron was acquired by the Gucci Group in 2000 and took a more global approach to the brand.

Featured today is a stunning Boucheron necklace: Taille de Guepe. (A necklace, earrings, pendent and two brooches in one piece.) 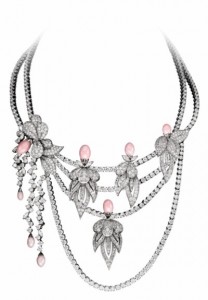