In honor of the Easter Holiday Watson and Son will be featuring two Faberge Eggs. Friday’s featured Egg is for sale, contact us for price and availability.

Tzar Alexander III played a major part in legacy of the Faberge name when he commissioned the House of Faberge to make an Easter gift for his wife, the Empress Maria Fedorovna. Faberge created an enameled Easter egg. The “shell” of the egg was enameled over gold to represent a hen’s egg. Faberge would create a additional gift with the “surprise”, the egg opens to reveal a golden yolk, which then opened to produce a gold chicken. In turn the chicken opened to reveal a replica of the Imperial Crown, a miniature ruby egg was suspended from the crown. The “Hen Egg” as it known is now in the collection of Victor Vekselberg.

The egg was such a huge success that they became a tradition with the Russian Imperial Family. Over time the eggs would become more and more elaborate, but each with the craftsmanship Faberge is known for around the world. 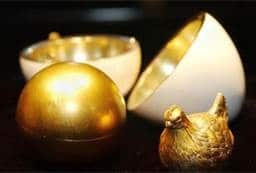