TOURMALINE: The Other Stone.

October is one of a couple of months that offer a choice of birthstones to chose from, Opal is the most popular. However, the Tourmaline is an excellent choice because of the vast colors found in this gemstone.

According to ancient Egyptian legend, the tourmaline was buried deep within the earth and as it made it lengthy journey to the surface it passed through a rainbow. As the stone traveled through the rainbow it assumed all of the colors during it journey. The Tourmaline is known to this day as the “gemstone of the rainbow”.

Tura mali is the Singhalese word for Tourmaline. When translated it means “stone with mixed colors”. The reference is for the varied color spectrum found in the stone, which has more colors then all other precious gemstones. Within the color range, each color has its own name. Rubellite is an intense red color. Blue colored stones are known as Indigolites, a yellowish to dark brown, Dravites. Green Tourmalines are known as Verdelite, if the color is especially fine it is called a Chrome Tourmaline and can often be taken for an emerald at a quick glance.

However, the most prized color in the Tourmaline family is called Paraiba because of its intense blue to blue-green color. This color of Tourmaline is found in the Paraiba mine located in Brazil and only recently discovered in 1987.

Because of the endless “faces” of this gemstone and that no two are exactly alike it will suit many moods and personalities. It has long been believed that the gemstone attributes firm and long lasting love and friendship. 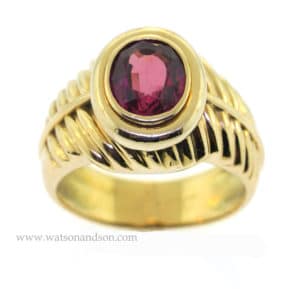