The Necklace: A history;

Pre-dating the invention of the written word, the necklace has been an integral part of human adornment since the stone age around 40,000 years ago. Archeologist’s have found a shell necklace in South Africa approximately 75,000 year’s old. The oldest of these necklaces were made from natural materials such as shell, bone, carved wood, coral and bird feathers.

Gold chocker and other adornments were discovered in Ur and later Sumerian’s used beads in necklaces along with colored stone’s set in copper and other metals. Egyptians took their necklaces from simple strung beads to complicated patterns. Pectoral and broad collar’s were worn by both men and women.

During the reign of Alexander the Great gold was abundant metal, making gold a popular material for centuries that followed. The Romans frowned on wearing jewelry, until the first century when they started the use of gemstones cut in geometric pattern’s. With the end of the second century piercing became the newest technique. A lace pattern set with gemstones of various colors. It also became the fashion for women to wear multiple necklaces at one time. Indicating her level of wealth.

The necklace saw a decline in popularity until the 14th century, when they enjoyed a renaissance. The necklace has remained a staple in the design of jewelry ever since. The style’s changing with the ever changing style of fashion over the years. Delicate, romantic, bold, tribal, platinum, gold, silver and accented with diamonds, rubies, emeralds, sapphires, semi precious stones, pearls, coral, enamel, and wood. The possibilities are endless.

Featured today is a stunning Black Starr & Frost Diamond and Conch Pearl pendent on a black ribbon from the early 1900’s. 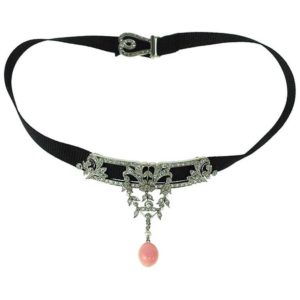