This delicate pendent style necklace was made famous by King Louis XIV of France’s mistress, the Duchesse de la Valliere. Louise was born on August 6th 1644 in Tours. The daughter of an Officer, her father took the name La Valliere’s from an Estate in Amboise. After the death of her father in 1651, Louise’s mother remarried in 1655 to Jacques de Courtarvel. The family joined the Court of Gaston, the Duke of Orleans. At the Court of the Duke, Louise was raised with the future Grand Duchess of Tuscany, Duchess of Savoy and the Duchess of Alencon.

Sixteen when she arrived at Fontainebleau, Louise was only there two months before becoming the king’s mistress. She was the King’s mistress from 1661 to 1667. Louise was intended to divert attention from a dangerous flirtation between Louis and his sister-in-law, however Louise and Louis quickly fell in love. Louise gave the King several children before her downfall at the hands of Francoise-Athenaiis, the Marquise de Montespan. In a twist of fate, she ended her relationship with the King the way in which she started: used as a decoy for Louis and “Madame”, as Francoise-Athenaiis was called. Tired of being used as decoy for the King and his new mistress, Louise begged to enter a convent. In 1674 Louise entered the Carmelite convent as Sister Louise of Mercy. She died at the age of 66 in 1710. Her daughter Marie Anne, her only surviving child inherited her fortune she acquired during her year’s as the King’s Mistress as well as the Duchy of La Valliere.

The Lavalier necklace is a delicate drop necklace that terminates in a single pendent or tassel, creating a chandelier effect. The style remained popular into the 1930’s 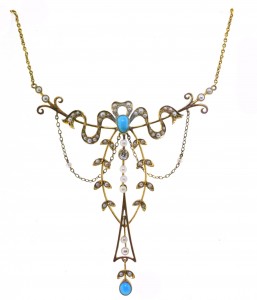