AQUAMARINE, A HISTORY AND LORE:

The Birthstone for March

The Aquamarine has long been admired by ancient civilizations from the Sumerians, Hebrews and Egyptians and was thought to originate from the treasure chests of Mermaids. The Romans had several beliefs in which the Aquamarine or “Gem of the Sea” played a role. It was believed if gem had a frog carved into it, it would reconcile enemies and make them friends. It was also believed that the pale blue of the stone absorbed the atmosphere of young love and “when blessed by a high priest and worn upon the body, it joins in love and does great things.”

It was the tradition for a bridegroom, after the consummation of their marriage the morning after an Aquamarine. The Greeks thought of the Aquamarine as the sailor’s gem and believed that it ensured safe passage of ships and crew across stormy tossed seas. It was also believed to render solders brave and invincible in battle and the gem was often used decorate the hilt of a swords and shields. The gemstone was believed to “reawaken and rekindle love” during Medieval times.

Since the early Christian era this gemstone was identified with Apostle St. Thomas, as he made his long journey to India via the sea. William Langland wrote “The Vision Concerning Piers and Plowman” in 1377. In it he mentions this gemstone as an antidote for poison. This was a well known antidote throughout Europe for poisoning was prevalent among European Royalty at that time. It wasn’t necessary to pulverize and consume this powder, a ring or pendent set with an Aquamarine was said to bring safety and prosperity to the wearer.

Featured today is a stunning Art Deco Aquamarine ring. The 12 carat Emerald cut Aquamarine set in platinum is supported in a bold 4- prong, double gallery setting. flanked on each shoulder with a scroll accented with 5, bead set round faceted diamonds (10 total). 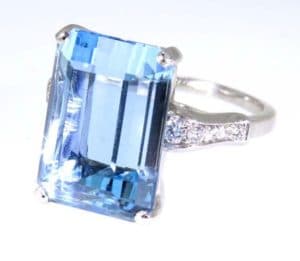