The story of the Submariner watch begins in the early 1950s when Rene P. Jeanneret, Rolex director, who was also an amateur diver, encouraged the company to develop a sports watch for scuba divers. 1953 saw Rolex test their new 6200 model timepiece as Auguste Piccard and his son Jacques attempted a world diving record. Not only was the pair successful in taking their “bathyscaphe” to a new world record depth of 10,335 feet below the ocean’s surface, but the Submariner survived the rugged underwater test as well.

That same year, Cousteau would make a documentary film titled The Silent World about the Mediterranean Sea, which ended up winning an Academy Award. Rolex made certain the famous oceanographer was seen prominently wearing a Rolex Submariner in all of the film’s shots.

1954 saw the launch of the Rolex Submariner model 6204 at the Basel Spring Fair. The company claimed its new timepiece was water resistant and could withstand depths of 200 meters (or 660 feet): something no other watch company had been able to accomplish to date. This same model (as well as the 6205), which was a bit smaller than the first “experimental” 6200 model, was officially launched for sale to the general public to limited success in 1955.

What made the Submariner perfect for diving — other than the ability to work at incredible depths under the water — is the rotating bezel keeps track of air time when divers are submerged. In addition, many of the other Submariner innovations were created to deal with the limitations of wearing a wet suit and gloves such as the Submariner’s famous flip lock clasp (later known as “triplock”.

Featured today is a Rolex Submariner. Contact us for price and availability. 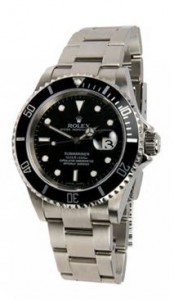