The pearl, at the time it was found was the largest ever found. The pearl was found off the coast of Santa Margarita in the Gulf of Panama by an African slave in the mid-16th century. The slave was rewarded with his freedom by Don Pedro de Temez, the administrator of the Spanish colony in Panama.
Temez carried the pearl to Spain for the future Philip II of Spain. It was given as a gift to his future wife, Mary I of England. The pearl was mounted in a pendent brooch. A favorite of Mary’s, it can be seen in several portrait’s done between 1553 and 1558. The most famous by Hans Eworth hangs in the National Portrait Gallery in London.

Upon Mary’s death in 1558, the pearl was returned to Spain. It remained part of the Spanish crown jewels for the next 250 years. The pearl was a favorite of several Spanish Queens over years. It can be seen in portraits of Elisabeth of France and Mariana of Austria, both wives of Philip IV. The wife of Philip III, Margaret of Austria wore the pearl to the celebration in 1605, the signing of the peace treaty between Spain and England.

Joseph Bonaparte, elder brother of Napoleon was installed as King of Spain in 1808. He ruled for five years before the defeat of the French at the Battle of Vitoria. Joseph fled the country with the crown jewels, including the La Peregrina. Upon his death, Joseph left the pearl to his nephew Napoleon III of France. The pearl was sold to James Hamilton, Marquess/Duke of Abercorn during Napoleon’s exile in England. Hamilton gifted his wife Louisa with the pearl. It remained on the Hamilton family until 1969 when it was sold at auction in London.

The pearl was purchased that same year at Sotheby’s London for $37,000.00 by Richard Burton as a Valentine’s Day gift for his wife actress Elizabeth Taylor. Burton commissioned Cartier to re-design the necklace. The La Peregrina was set with pearls, diamonds and rubies. Burton also purchased the portrait of Mary I of England wearing the pearl. After learning that the British National Portrait Gallery did not have an original portrait of Mary, the Burton’s donated the painting to the gallery.

The necklace sold at Christies New York in December 2011 as part of the Elizabeth Taylor collection of jewelry. It was estimated at $3 million, however the necklace sold for $10,5 million. 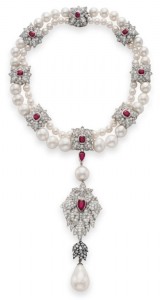