A Cobalt Blue pear shaped diamond will be featured at auction next month in Geneva. The 13.22 carat diamond known as The Blue is described by Christie’s as “the largest fancy vivid blue diamond in the world”.

Expected to fetch up to $25 million dollars and will be the center piece of the auction house’s “Magnificent Jewels” sale schedule for May 14th, 2014. The impressive Cobalt blue diamond is currently privately-owned diamond is a “sensational stone,” the auction house said, adding that the seller wanted to remain anonymous.

Given the recent auctions of a 14.82 carat orange diamond called “The Orange” which sold for 35.5 Million dollars at Christie’s last November well over the starting price of 17 Million. The intense color of “The Blue” could fetch far more the $25 Million estimate.
Another record price was the $83 Million dollar Pink Star, the world’s largest pink diamond sold. However, Christie’s was forced to take back the Pink Star last month after the buyer defaulted on the payment.

Among other Diamonds of note at the auction will be a 5.5 carat vivid blue-green named “The Ocean Dream” with an estimated price of 9.5 Million. The Magnificent Jewels auction will comprise over 250 items with a value of 80 Million dollars to titillate bidders with a variety of jewels.

Featured is “The Blue”. 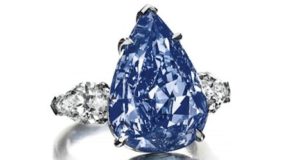