OPALS: The birthstone for October.

The “Queen of Gems” the name comes from Opalus, Latin and Opallios Greek and has been treasured thought the world as one of the most beautiful and magical gemstones. Evidence suggests that the Opal was first mined in North America over 10,000 years ago in the Virgin Valley. Archaeological artefacts can also be found in Kenya six thousand years ago.

A look back through history, you can find mention of Opals dating back to ancient Greece. Theophrastus quoted his friend Onomacritus stating “the delicacy of the opal reminds me of a beautiful and loving child”. Mark Antony presented Cleopatra with an Opal ring early in their famous affair. One of the best descriptions of an Opal came from Pliny, who described the stone as “having the refulgent fire of a ruby, the glorious purple of amethyst, the sea green of an emerald, all glittering together in an incredible way”. From a Holy Roman Emperor during the Middle Ages who preferred Opals in his Crown to reign of Elizabeth I and William Shakespeare who declared the “Queen of Gems”. Queen Victoria loved Opals, often gifting them to member of the Royal Family and close friends. She delighted in wearing them throughout her life
.
In the late 1880’s opals were discovered in the Lighting Ridge area of New South Wales. The gem wouldn’t appear in the world market place until the late 1890’s. Today most of the worlds Opals are supplied by Australia and is the national stone of the country. 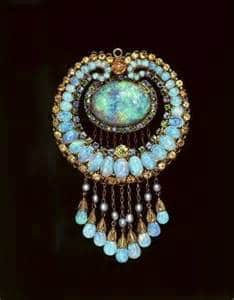