Throughout history you will find several myths and legends that revolve around Opals. As far back as ancient Greece the Opal has had a place history of the culture of the times. It was said that Zeus, King of the Greek gods was so pleased when he defeated the Titans that he wept tears of joy and that upon hitting the ground they turned into Opals.

Ancient Greeks also believed the Opal lessened the wearer’s inhibitions and would reveal their true feelings. It was also believed to bestow the gift of prophecy and foresight to any who wore the stone.

Another legend involves the Indian Goddess of the Rainbow. A Stunningly beautiful goddess she was besieged by the male gods seeking her favor. She was eventually so desperate to escape their unwanted advances that she turned herself into an Opal of beautiful rainbow colors.

The Opal was known as the “ophthalmios” or the eye stone during the Middle Ages. It was thought to be beneficial to the eyes of those who wore the stone. It was during this time as well that Blond women would protect their hair from losing its color if they wore necklaces with opals
.
It was during the 18th and 19th centuries that the Opal fell out of favor when it became associated with the fall of monarchies, pestilence and famine. Europe in the mist of the Black Death, it was felt that an ill patient wearing an opal, the stone would be ablaze with color up to the point of death, then it would lose its brilliance upon the death of the wear.

The Opal also has a story of revenge. During the 19th century King Alfonso XII of Spain is said to have received an opal ring from a vengeful Countess who he rejected her passion. He later presented the Opal ring to his wife who later died unexpectedly. The ring passed through the family, each new owner died suddenly and mysteriously. The finally decided to wear the ring himself to prove the curse false, he died a short time later. The ware bouts of the ring is not known to this day. 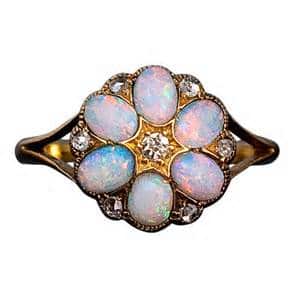