Nathan, Oscar left home in Latvia in 1901 at 13 and 16 to apprentice with their Uncle at the famed Faberge jeweler’s in Russia. After 5 year’s of rigorous training at the workshops of Faberge the brother’s along with their three sister’s moved to New York in 1906. Younger brother Harry would arrive in New York a year later. Using their abiding passion for diamonds and gemstones, gracious customer service and the rarified skills learned at Faberge they opened Oscar Heyman in 1912.

The brother’s talent for working in Platinum was highly sought after as Platinum was becoming the most fashionable of metal’s for Jewelry design. The brother’s study in Russia was a marked advantage in working with the metal as Russia one of the only suppliers of Platinum before World War I. The result’s of their craftsmanship, design talent’s and eye for gemstones can be found in the heirloom quality of their designs that transcend time. Oscar was the first non-French jewelers to work for Cartier when they opened their New York store in 1909.

They quickly became know as the Jewelers Jeweler. The Heymans would manufacture jewelry for some of the most important houses in the world of jewelry: Cartier, Van Cleef & Arpels and Tiffany & Co to name a few. Oscar Heyman didn’t always sign their work, however each piece was engraved with a number that corresponds to their detailed archive’s. Oscar Heyman manufactured nearly all of the invisibly-set jewelry made in USA from 1936 until the VCA company was sold. One of the Heymans most famous commission’s was in 1969 by Cartier to design Elizabeth Taylor’s diamond necklace for the 69.42 pear-shaped Taylor-Burton diamond.

Oscar Heyman is still owned and run by members of the Heyman family, making it one of the few jewelry houses still owned by the founding family. Bringing centuries old world skills, blended with modern technical advances second and third generations of the family continue to design and create jewelry of the highest quality. In fact many of those in the workshops at Oscar Heyman are relatives of the original staff from the companies founding 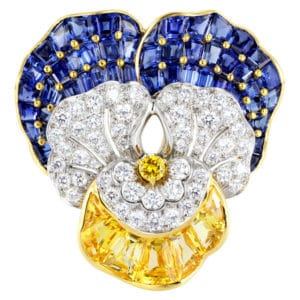