Over the next couple of weeks, Watson and Son will be featuring The History of Jewelry 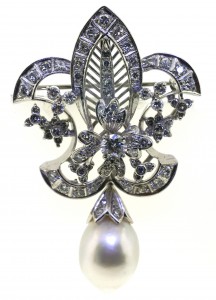 THE BROOCH: The oldest form of Jewelry.

Dating back to the Paleolithic age and made of thorn’s for the purpose of holding skin’s together. The Bronze age saw distinctive design’s and the type of fastening mechanism’s. The Brooch was found in Roman, Etruscan and Greek Culture’s. The Scandinavian’s made major contribution’s in the Design of the Brooch as it was a necessity to keep their heavy garments closed in the cold climate’s of the North. However, the Byzantines had the most important influence as well as the earliest in the design of the Brooch. From the sixth to the tenth centuries, producing enameled Brooches in bright colors. The early Christian’s advanced the Brooch toward more ornamental in character.

In later year’s the French and British added stones to the enameled design’s being produced to off set the look of heavy metal work. With the changes in dress during the Middle Ages the Brooch became less of a necessity as a fastener and more of an Ornament to show wealth and status.

By the eighteenth century Brooches took on a more geometric arrangement, with a small grouping of stones set around a larger one. “Girandole” was the most popular type of Brooch. It was a formal floral arrangement around a larger center ornament, usually with three hanging Pearls. There were variations, the most basic form was a knot of ribbon accented with flower’s and other ornamentation. From the 1780’s to present day, the use of diamonds, pearls, and semi precious stone’s have remained popular. Enamel work, Wedgwood Cameos and miniature portraits have also been popular motif’s for the Brooch. The Edwardian Era dovetailed with the “La Belle Époque”, or “the beautiful era” of the late 19th and early 20th centuries. The Belle Époque period was known for its high-style and the luxuriant lifestyles of the privileged elite who indulged in its excesses. The avant-garde Art Nouveau movement also overlapped the two eras. The Art Deco period brought a return to geometric designs