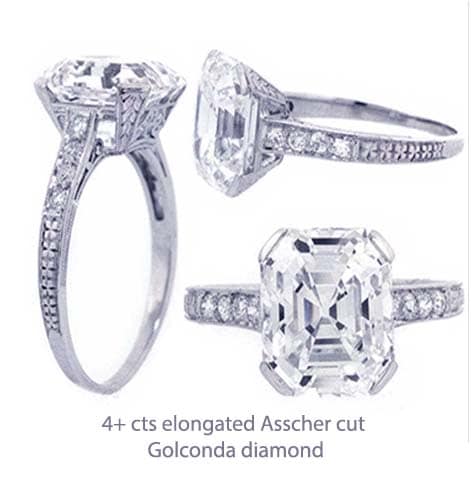 Golconda is an area in the Telangana region of India  known for its  mines (now closed) that have produced some of the world’s most rare and famous diamonds, including the Koh-i-Noor, the Hope Diamond and the Nassak Diamond. Golconda was the only place in the world for some 2000 years where diamonds were found. Diamonds from this mystical source are known for their boron content and lack of nitrogen, giving them unprecedented purity and in the case of their white varieties – colorless crystals. With a lack of yellow.  Famous fancy colored diamonds from the Golconda region include the blue colored Hope diamond and pink varieties.  The African mined diamonds were first discovered in the 13th century and contain nitrogen often giving them a yellowish tinge. The much rarer Golconda diamonds represent a mere 2% of all diamonds ever mined, having the appearance of faced spring water from the highest source.

Not to get too scientific… The Golconda diamonds are classified by independent world class laboratories such as the GIA and Gueblin  as Type 11a. Type 11b refers to diamonds that have nitrogen.