THE SANCY, THE BLOOD DIAMOND:

It’s hard to imagine that a Diamond with the fabled history of the Sancy Diamond could be over shadowed. However, set in a simple mounting of white gold at a paltry 55.23 carats the Sancy when displayed along side the peach/pink colored Hortensia or the stately Regent at the Louvre’s collection of Crown Jewels could be passed by in favor of it’s grander counterparts.

And yet if the stone could speak to revel it’s history the listener would be captivated by stories of pomp and ceremony, intrigue, war, schemers, moneymen, lords, ladies and monarchs who plotted, schemed, lusted after, owned and commented murder to posses the coveted gem.

Originally mined at the famed Golcondia Diamond mines in India, the Sancy begins a journey that will span 600 years, three continents and would see spectacular events unfold in the history of Europe. Legend foretold the stone would make the wearer invincible and yet it was believed a violent death would be fall anyone who owned it according to an ancient curse.

The centuries found the Sancy true to it’s paradox of it’s legend. England’s King James I wore the stone as a lucky hatpin. Charles the Bold of Burgundy lost it in battle in the 15th century, a Swiss solder found it and sold it a priest in Basel. King Henry IV courier was killed when the stone was torn from his stomach after he swallowed it to conceal it from highwaymen. Coveted by Queen Elizabeth I for decades, won and lost by King’s of Portugal, stolen from the Louvre during the French Revolution and helped give swift rise to power of Napoleon Bonaparte. The Sancy would disappear two in it’s history, once for 120 years. Susan Ronald’s book “The Sancy, Blood Diamond” weave’s a fascinating tale of the Diamond’s history. The Astor’s of Great Britain back through time, King Charles I, Louis XVI, serf who became a Russian Prince to the Duke of Milan, John Galeazzo di Visconti.

This enthralling tale of The Sancy will be the April contest prize, so stay tuned.

Pictured below is the “Blood Diamond” 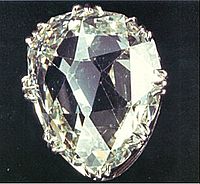